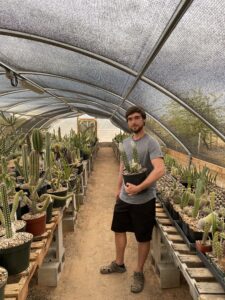 If you think that a cactus would be one of the plants least affected by global climate change, think again. Michiel Pillet, our speaker today, led a recently published study of how different species of cacti respond to their environment and how climate change might affect them. The conclusion was that over half of the world’s cactus species may suffer from global warming. Although our local cacti may not be affected as severely as those in some other parts of the world, we do have things to worry about besides dried-out buffelgrass fires killing saguaros, and Mr. Pillet will tell us what they are.

Mr. Pillet has a Bachelor of Science Degree from Montana State University and is now completing his PhD studies in Ecology and Evolutionary Biology at the University of Arizona. In addition to his research activity with the university, he is the owner of Prickly Prospects Cactus Nursery and a nursery worker at Arid Lands Greenhouses, both of which are Tucson sources of succulents and cacti. Even at this early stage of his career he has already contributed to five scientific publications and given presentations at the Tucson Cactus and Succulent Society and the Arizona Native Plant Society.