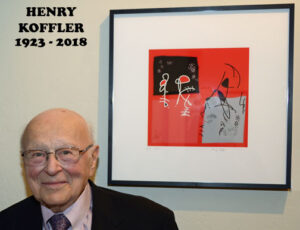 The concept of a retirement community for professionals who want to remain actively involved in their fields or other creative pursuits and to continue making contributions to society originated with Dr. Henry Koffler (1922-2018). Trained as a molecular biologist, Henry served in administrative positions in a number of universities, culminating in his service as president of the University of Arizona from 1982 to 1991. He had long been aware of the problem of retiring professionals, who were engaged in active careers and then suddenly faced a lack of useful activity and a sense of no longer being needed by the greater community.

To learn more about Academy Village and its Homeowners Association, go to theacademyvillage.com.

The seed for the Academy project had been germinating since, as a young faculty member, and later as a senior university administrator and consultant, Henry became concerned about the discontinuity created by the sometimes abrupt departure of senior professionals in education, business and government. He recognized that, in addition to limiting their individual creative opportunities, the retirement of these professionals resulted in a loss of talent and institutional memory that the nation can ill afford.

Henry believed a community designed to bring together individuals with intellectual curiosity in a stimulating environment would foster their continued involvement and personal growth. The availability of a wellness program and supportive health care would help the community to enjoy a healthful lifestyle. The combination of these features would serve as a national model for creative retirement.

In 1991, when Henry announced that he wanted to leave his position as University president and return to the faculty, several board members of the University of Arizona Foundation encouraged him to begin the development of what later was to become the Arizona Senior Academy, a not-for-profit and tax-exempt corporation, and the Academy Village. This initiative was based on the expectation that such a unique community would benefit not only the participants and greater Tucson, but would also meet a national need for dealing constructively with a rapidly increasing number of active older adults.

Responding to the challenge, Henry persuaded Lloyd Lewis, an experienced leader in the development and operation of Continuing Care Retirement Communities (CCRC) to be a partner with him in this endeavor. Lloyd Lewis was the founder and former CEO of the Kendal Corporation and Kendal Communities Development Corporation near Philadelphia. Lloyd retired from his Kendal positions and started a new organization, the US Retirement Communities, of which the Arizona Senior Academy Development Corporation became a subsidiary. As president of ASADC, Lloyd was joined by his son, Paul Lewis, who became vice president.

In locating the Academy Village, Henry and Lloyd considered approximately two dozen sites, and settled on 169 picturesque acres adjacent to Saguaro National Park East in the foothills of the Rincon mountains. The site was within the Rocking K Development, a sensitively planned residential and resort community. The plan for the Village included 204 single family homes and 60 town homes. There was to be a central campus consisting of the Arizona Senior Academy building, a Community Center, an assisted living facility, a tennis court, a swimming pool and exercise facilities. The Academy Building was designed to contain a Great Room and Library, two class rooms, a computer center, a conference room, administrative offices, workspace for large office equipment and a small kitchen.

The intention was to equip all structures with state-of-the-art communication technology and to connect them with the University of Arizona Library. This capability would enable the Academy to provide educational and cultural programs on-site and to broaden its reach through interfacing with other institutions. These connections would enable individual members—-even those who may be temporarily or permanently disabled—-to collaborate with colleagues worldwide and to keep the windows to the outside world open.

The Academy would offer Village residents a wide choice of educational and cultural opportunities. Members would enjoy a rich program of on-site classes, lectures, concerts and other artistic performances. Workshops and seminars could be offered; small groups for study, special interests and discussion could be organized. The Village would avoid becoming isolated from the larger community by encouraging member interactions as mentors with young people, as well as by sponsoring participation in Academy programs by the general public.

As far as circumstances have permitted, this plan has served as the blueprint for The Arizona Senior Academy and The Academy Village. Because the complete build-out of Academy Village is not yet completed, certain aspects of the proposal await future implementation.