Would you like to learn about the history and geographic roots of the marimba and listen to a pair of outstanding percussionists play this unique instrument? The Arizona Senior Academy will present “Marimba Magnificence,” a lecture/demonstration/performance on Tuesday (March 7).

Beginning at 11:30 a.m. in the Great Room of the ASA Building, the program will feature Dan Kruse, former Tucson host of NPR’s “All Things Considered,” and Trevor Barroero, an award-winning percussionist now completing his undergraduate degree at the University of Arizona.

Kruse will comment on many aspects of the marimba including its construction and history. Borroero will perform a variety of pieces and they will do one as a duet, both playing the same instrument. The program will include compositions by J. S. Bach, Jacob Druckman, Evelyn Glennie, and others. 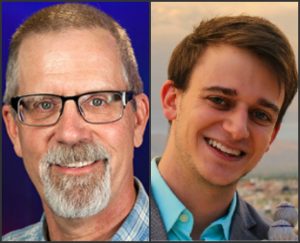 Kruse received his Masters of Music in ethnomusicology from UA and has focused on musical research, lecturing, workshops and documentary film and audio. After retiring from announcing duties at KUAZ last August, he now works part-time with AZPM, announcing on KUAZ-FM and producing music-related documentaries for Arizona Illustrated and Arizona Spotlight.

Barroero is the winner of both UA School of Music and the Tucson Symphony Concerto competitions. He has won several other gold medals, most recently the Pacific Region International Summer Music Academy’s competition that resulted in an invitation to travel to Russia to perform as guest timpanist with the Moscow Symphony Orchestra this past December.

A Tucson native, Barroero has been attending live auditions for entrance in master’s degree programs at several prominent music schools, including Yale University. He has performed as a soloist with nearly every major orchestra in Southern Arizona including the Tucson Symphony, the Tucson Pops, the Civic Orchestra of Tucson, the UA Symphony, and the Tucson Philharmonia Youth Orchestra.

These events are held in the Great Room of The ASA Building adjacent to the Academy Village Community Center. Due to the popularity of cultural events, non-residents who wish to ensure priority seating are advised to make reservations by email at info@arizonasenioracademy.org or by phone at (520) 647-0980. To learn more about the Academy, go to www.asa-tucson.org.

Parking for visitors is in the lot behind the Community Center. All parking spaces in front of the Academy building are reserved.