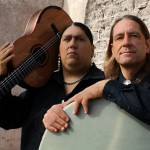 Now in their sixth year performing as Duo Sonora, Gabriel Ayala and Will Clipman will combine their musical talents onstage at the Arizona Senior Academy Tuesday (June 25) for a concert beginning at 11:30 a.m.

Ayala, a Native American Music Award winner and classical guitar virtuoso, has an affinity for diverse musical genres. Spending much of the year touring as a soloist, he performed at one of President Obama’s inaugural balls in Washington, DC in January and is planning a performance in Cape Town, South Africa later this year. His recent exploration of expanded ensemble formats led to the Memorial Day weekend debut of the Gabriela Ayala Quintet at the opening concert of the Tucson Jazz Society’s Summer Series.

Grammy nominee and pan-global percussionist extraordinaire, Will Clipman draws on a palette of over 100 indigenous instruments. His recent schedule has taken him to the Musical Instrument Museum Theatre in Phoenix where he appeared with Native American flutist R. Carlos Nakai, and to Northern California with the world chamber fusion ensemble Coyote Jump.

Despite their divergent schedules, Ayala and Clipman enjoy the rare opportunities to perform together.  Regarding each other as “my brother from another mother,” they thrive on the improvisational synergy of a Duo Sonora performance. Their ASA appearance will be their last scheduled event in 2013, so a large crowd is expected and non-members are urged to make reservations.