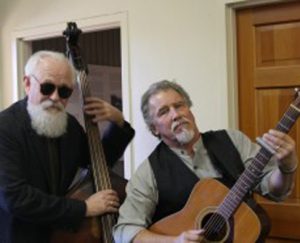 The Arizona Senior Academy starts off the New Year with a return of the Arizona Blues Hall of Fame duo, Grams & Krieger.

Bassist Steve Grams and guitarist Danny Krieger have been making music together for some 20 years, but their combined professional musical experience spans over 100 years. These singer/songwriters have produced five CD’s together with mostly original material, and have toured in Europe countless times, especially in the Netherlands. They like to point out that they do not limit themselves exclusively to the blues but enjoy playing a variety of genres.

Born in Sioux City, Iowa, Steve Grams began playing bass there and continued doing so at the University of North Dakota and later in Minneapolis. He has been in Tucson since 1979 and has built a reputation as one of the area’s most reliable acoustic and electric bassists, playing on and/or producing over 100 recordings, and touring nationally and internationally. His many sideman credits include working with Dave Gonzalez & the Stone River Boys, Smokin’ Joe Kubek, Bo Diddley, Long John Hunter, and Holland’s Mr. Boogie Woogie.

Danny Krieger, one of the Southwest’s most respected guitarists/slide guitarists, was born in New York City but grew up in Los Angeles. His resume includes international tours with the ‘70’s British pop band “Christy” and recordings with varied artists from Exene Cervenka to the late Andy Gibb. He has worked with Big Joe Turner, Coco Montoya, and Johnny Rivers, and toured with Sam Taylor, “The Mollys,” Mr. Boogie Woogie, and John “Juke” Logan.

Grams and Krieger often appear around town in regular gigs with the Bad News Blues Band at the Chicago Bar, Wilbur’s Grill at the Viscount Suite Hotel, or at the Gaslight Music Hall.