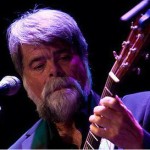 A multi-cultural mix of traditional Southwestern and Mexican songs, along with innovative original material, will be featured at the Arizona Senior Academy on Tuesday (Aug. 13), as Ronstadt Generations y Los Tucsonenses take the stage for a midday concert at 11:30 a.m.

The Ronstadt family’s musical history in the Southwest goes back across five generations to the 19th Century, and the current configuration of the band continues the family tradition.  Michael J. Ronstadt (guitar/mandolin/vocals) and his son Petie (guitar/bass/vocals) will be joined by Los Tucsonenses bandmates Alex Flores (tenor sax/vocals), Sam Eagon (upright/electric bass) and Aaron Emery (drums/percussion).  Michael J.’s other son, cellist Michael G., is a member of the group but will miss Tuesday’s concert due to a previous solo commitment.

The band grew out of a project of Michael J. Ronstadt’s to create a multimedia concert to present music from the Ronstadt Family through time.  A spontaneous Thanksgiving jam session in 2009 evolved into a rehearsal of generations of material with new arrangements forming the basis for their repertoire.

Michael J., along with older son Michael G. and younger son Petie, had previously spent seven years touring the country and the world with Ted Ramirez and the Santa Cruz River Band, and now found themselves touring again as Ronstadt Generations, following the release of their first album, “Lulu.”

While off the road, Michael J. and Petie began a regular gig at the Chicago Bar in Tucson, while Michael G. was in demand on the East Coast and in the Midwest as a solo cellist and ensemble artist.  Over time, Michael J. and Petie’s duo at the Chicago Bar evolved into a larger band which became an integral part of the Ronstadt Generations ensemble.